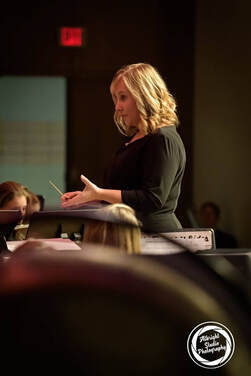 ​Mrs. Jessica Kaledas has been the band director at South Williamsport School District since 2005.  She is a graduate of Mifflinburg High School and a graduate of Susquehanna University with a Bachelor's of Music Degree in Music Education.  In 2014, Jessica earned her Master's of Education Degree in School Administration from Bucknell University.  Jessica's primary instrument is horn.  She has performed with the East Stroudsburg University Community Band, Milton Community Band, Penn Central Wind Band, pit orchestras, and brass quintets.  She is the current Vice President and Secretary of the Lycoming County Band Directors' Association (LCBDA).  She resides in Lewisburg with her husband and two daughters, Natalie & Juliana.